Norfolk Island holidays can be fun and relaxing. Take a walk on their sandy beaches, visit historic sites, museums, and landmarks, or do water sports activities. These are a few recreational activities you could do to enjoy the island. When in Norfolk Island, you can also take time to enjoy natures best. 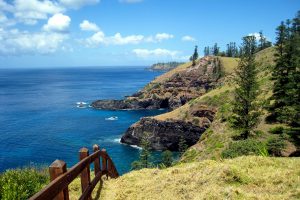 The island is home to a variety of animal species both native and introduced. Mammals and amphibians aren’t common in the island and the only reptiles seen on small rocks are the skink and the gecko. Birds are the major vertebrates found in the island where 43 species are native such as the golden whistler and the grey fantail. There are also birds that are close to extinction like the green parrot and the boobook owls. Migratory birds like the red-tailed tropic bird, masked gannet, fairy tern, and the white faced-heron are seen in the island as well. When visiting the island, there is this one bird that you will hear at night, the wedge-tailed shearwater or the “Ghost Bird”. The name is taken from its ghost-like moaning sounds that echo around the island.

The waters of Norfolk Island are also full of life. Tropical fishes like the garfish, parrot fish, grouper, clownfish, lionfish, and trumpeter made their homes in coral formations found around the island. Other species like starfish, octopus, and moray eels also dwell in these reefs.

Insects of different species also inhabit the place where many of them are yet to be studied and classified. These include spiders, butterflies, beetles, bees, and moths. Remarkably, creatures that are dangerous and fatal aren’t present on the island.